2 Comments
By For Your Sins What We Talk About 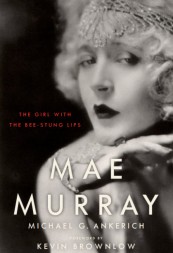 Yeah, yeah, I know that every time a silent screen actor is mentioned, it’s always with the phrase “A huge star in his/her day, so-and-so is largely forgotten now” mentioned sooner rather than later. But! Mae Murray really was a huge star in her day! You know how you can tell? Her husband had a title. He was a Georgian prince. Or maybe a “prince.” Regardless.

One thing you should know about Mae Murray is that, some afternoon at Lindy’s Deli, she dropped her donut in her coffee and the world went, “Ohhh. Yes!”

Alas, the “girl with the bee-stung lips” had a sad post-spotlight time of it.

She toured the country for a while in the 1940s (and her 50s) in a nightclub act, where she refused to acknowledge her age. Norma Desmond was said to largely be based on Murray, but after a screening Murray said, “None of us floozies was that nuts.” She had a meltdown in the Brown Derby when her caricature was moved to the back area. She was frequently picked up for vagrancy. The year before her death, she took a Greyhound bus on a coast-to-coast publicity tour, publicizing herself, before she ended up lost and confused in St. Louis, and the Salvation Army had to send her back to L.A.

At that point, she was pretty much financially supported solely by the largesse of George Hamilton and his mother. She ended up at the Motion Picture Country Home, where, a star to the end, she would snap, “Step aside peasants!” at the nurses. Now, for some wonderful reason, Murray is being resuscitated this November with Michael G. Ankerich’s unlikely biography, Mae Murray: The Girl With the Bee-Stung Lips, from University of Kentucky Press. Have I ever seen a Mae Murray motion picture? Nope. Will I read this as soon as it’s out? Oh, yes. Step aside, peasants. I’ve got a new book to look forward to.